On December the 13th 2012, a great singer of thrash and metal in general passed away. Keith Deen. The following article was published in Metal Hammer October 2012, two months before his untimely death. A small text follows, which was part of the August special (2013) on fallen heroes.
R.I.P. Keith Deen. R.I.P. Holy Terror. 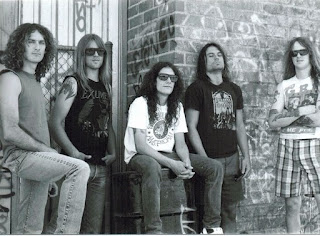 Holy Terror: Far right is Kurt Colfelt and right next to him the great Keith Deen.
Have you ever dug up something you haven't heard in years and relive the love all over again? That's what happened to me with Holy Terror. The reason was the speed metal special, where in a sense they define my obsession with the label. “Terror and Submission” is "more speed metal" according to the Agent Steel a posteriori "rule". But under the “Speed Kills” rule, “Mind Wars” destroys the speedometer and feeds Agent Steel with dust, in the head-to-head race between “Debt of Pain” (Holy Terror) and “Back to the Reign” (Agent Steel). It's a head-to-head race because they are basically the same song, by the same composer, a case like The Four Horsemen/Mechanix (without the underlying venom). Kurt Kilfelt (or Colfelt as is his real name) wanted to rework it with his new band. And the result, I think, justifies him.
In any case, since that day, Holy Terror set camp in my stereo and there they are still. I'd like to say a few words because from the ocean of unlucky ("unfairly treated") bands, they are probably my favorite. Kurt was a great asset and equally great was Keith Deen, that characteristic voice of their, which gives them so many points of uniqueness and grandeur. 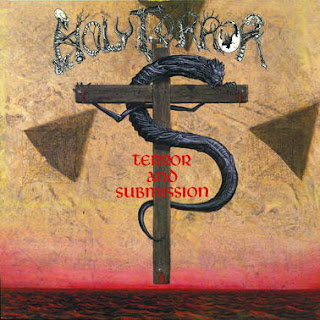 In 1987's “Terror and Submission” they play thrash metal, although on the one hand it has huge amounts of melodic, sometimes epic heavy metal and on the other heaviness that owes as much to hardcore punk (they did a tour with "Crossover" era DRI at the time) as it does to Slayer. The ace in their sleeve are the vocal lines. “Distant Calling” would have been a heavy metal masterpiece even without the vocals. The basic melody between the lyrics for example has something of Warlord's (!) magic. And Deen comes on top of that and sings such a moving melody that catapults the song to the pantheon of metal epics. And I still haven't mentioned the feast of solos that you wish would never end. On the album's title track they reach the level of “Doomsday for the Deceiver” (I don't say this often). If “Guardians of the Netherworld” was a 7' from an obscure company of a sword-wielding band, it would cost 100 euros a copy and it would be worth it too. I feel bad that I don't have the space to say a few words about each song, that is the kind of album we're talking about here (“Blood of the Saints” dammit!). The only problem with the album is that the production was handled by two guys, whose experience and strength was disco music...

A year later and the guys have completely taken off in “Mind Wars”. Preserving all their amazing features, the band has just become better, has a much better production and simply nails the accelerator on the foor. Rabid playing and compositions that show no hesitation in uniting thrash, deathrash, epic, hardcore (on “Do Unto Others” you could easily imagine Connelly or Brecht on vocals), all harmonized and Holy Terrorized. Keith is firmly amazing. There is an orgy happening beneath him and he sings incredible melodies and I swear to God, at times he reaches levels of splendor that combine the epic feeling of Quorthon, the endless firing of lyrics of Sabbat era Martin Walkyier and the power of a Jon Oliva. Just listen to that chorus of “No Resurrection”! Do you know many bands in 1988 that played so well, so originally, so contemporary but also fresh, so violently and melodic at the same time? Of course the people who heard them usually lost their shit, as it happens to anyone with a taste for such things. But when Roadracer agreed to take them on, everything went to hell. Someone spoke of the deal too soon and it reached Music for Nation's ears. They kicked them off the european tour with Exodus ("You wanted Roadracer? Traitors!") and left them in Germany, letting them figure out a way to live for two weeks until they got back to California. That was the end of it. They tried to pick someone between them to place the blame and not nicely, and eventually lost their courage. They moved elsewhere but Keith did not follow and the band was honest enough to know that no Keith Deen, no Holy Terror. And as it happens in these cases, the grandeur was contained within those few who look beyond the surface, regardless of the fact that Holy Terror concerns far more people than the status of their name suggests. Do the good thing and seek them out, I promise you it's worth it.

Keith Deen begun as a mix of Bon Scott and Roger Daltrey from his very dear 70s but after some considerable courting by Kurt Colfelt joined Holy Terror, where he thrived with his special timbre (he has something of Oliva). His favorite vocalist was (the uber-awesome) Mel Blanc, whose many cartoon voices he could imitate perfectly, as well as those of many famous people, since he was an exceptional mime. That definitely must have helped him to have the ease to sing as a hardcore punk, as an epic metal singer, or as a rabid thrasher, when performing the beautiful vocal melodies (which were his). I also think he was a brilliant lyricist. His departure from the band (esp. after his daughter was born) also marked its demise, since, according to Colfelt, "what made Holy Terror so original was Keith's vocals".

at last someone's paying tribute to this great band,mind wars is propably the best thrash metal album of all times,combining rawness,speed,melodic vocal lines and technical play without making it a tech-thrash album though..love the lyrics too..full of aggression,full of attitude,a true masterpiece that never gets old.

Anonymous - what you said!

Anonymous - what you said, again!