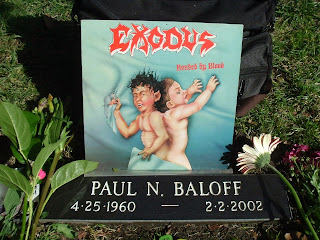 Today, February the 2nd, 2015, marks 13 years since the death of Paul Baloff, one of the most important metal frontmen, with a HUGE impact on thrash metal. For the occasion I'm putting up the following text, which was originally published on Metal Hammer, August 2013. I also added some stuff that did not fit in the magazine's pages.

Name: Paul Baloff (The name is of Russian origin)

Cause of death: Stroke 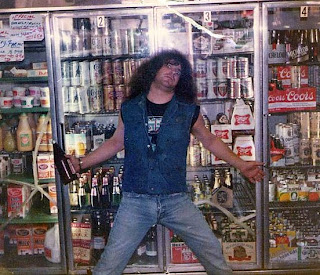 Growing up in hardships and poverty, Paul Baloff was the ultimate thrash metal beast. His story doesn't fit here, you're gonna just have to believe me that he was the epitome and the vanguard of the thrash metal spirit among the boiling scene of the Bay Area. Baloff, in his larger-than-life persona but also with his truly extreme vocals (from '83 already), was VIOLENCE and mania incarnated. And his “poser killer” speech was LAW. Just think that when Slayer visited the Bay Area for the first time, after releasing "Show No Mercy", that first, they opened for Exodus (without any album) and second, the Baloff-educated audience made them lose pronto the LA poser shit with the eye mascara. Unfortunately, the various abuses cost him his career and probably led to the stroke, when the nth reunion finally seemed to work.

Death
The last thing Paul did in his life was take a ride with his bike on January 31st, 2002. After getting back to his apartment, his girlfriend left him for a couple of minutes to lock downstairs. When she got back, Paul was already on the floor having a seizure from a heavy stroke. When he was admitted to the hospital he was already in a deep coma and after two days the doctors pulled the plug, since he was clinically dead with no brain activity.

Murder in the Front Row gentlemen – BONDED BY BLOOD! But don't stop there. Besides the historical demos (ALL) you should absolutely check the various live shows that (ALL) exhibit most eloquently why that riffraff is in the mind of many - including the pioneers of the scene - the ULTIMATE thrash frontman. Start with the Ultimate Revenge of 1985. Listen to the infernal“Another Lesson in Violence” of 1997. And for the icing on the cake go on YouTube to watch the Paul Baloff Workout. Or, since this is not a magazine, press play on the following:

* You couldn't be more METAL than Baloff ("Metal rules and if you don't like it, DIE!") and his passion and heaviness did not leave anyone untouched. How massive his personality was is confirmed by every account of the era, including Mustaine's (difficult man, doesn't flatter easily), Slayer's and especially Hetfield's. Hetfield had handled the production on Piranha's demo, the band Baloff had with Fred Cotton (close friend of James, they were playing together in Spastic Children). Hetfield has also promised to write a song for Baloff, something that we're still waiting for and I would very much like someone to remind him during an interview. For many reasons, above all because it's disgraceful for the metal community that a hip-hop tribute to Baloff exists and with such a video and nothing from us.

However, it is inconceivable that this article should close with hip-hop, so the epilogue belongs to Paul. This song... it ain't about no goldfish...