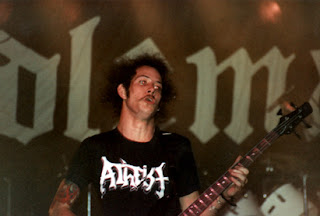 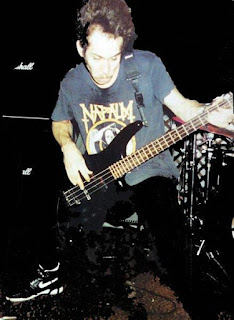 Roger Patterson is remembered as the bassist of Atheist, who had some funny similarities with Cliff Burton. Thin moustache and eccentric appearance, an inclination towards weed, humility and anti-star attitude, impressive technical skills, and more macabrely, he was killed in almost the exact same way at a very young age (22 years old). But the similarities do not end there. Roger Patterson was the major composer of the band, to the point of writing most of the songs around his bass, which was virtually unheard of, creating a unique result. Technically he was a BEAST, at his time comparable only to Doug Keyser of Watchtower, whom he admired endlessly (the feeling was mutual). 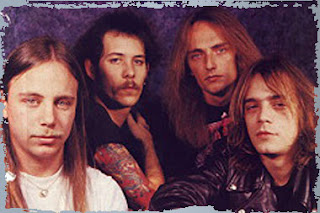 He plays on only one record, the band's debut, "Piece of Time" (1989, one year after "Leprosy"!), although you have to listen the band's demos, some of which are exceptional. He didn't make it on the second (and greatest I personally find) album of the band but he basically wrote it, according to Kelly Shaefer (vocals/guitar). Outrageous feats, just at the beginning of 1991. In the most competitive Florida scene, Atheist, lead by their genius bassist and the equally uber-player drummer Steve Flynn, were definitely the leaders of wtf-skills and playing, dragging everyone behind them. More to the point though, it is the songwriting that was based on Roger and the band's music vision that changed the course of music forever. Literally game changers. There's the basic similarity: 22 years old and both of them changed music.

Footage from Roger Patterson's last show, February of 1991. From the tour with Candlemass (!)

Published in August, 2013, in the Greek Metal Hammer

Thank you for this article.

I will never forget you my friend, Roger Patterson. I'm so blessed to be able to share your memory with my newest and best friend James Potter. Who appreciates your style of music. Mucho love to you, Twila Dawn... I will see you again. Evil Chuck too!!! And, to your twin who was so lost without you I'm sending prayers and blessings your way. Muah