Let's talk about Ghost - aka Stop the Madness

These are some thoughts put down on record, mainly to preserve my sanity and to refer anyone asking me about my opinion, here. I'm really tired of the whole thing...

TL;DR: Ghost is becoming better and better, their relationship to metal is irrelevant since the promotional frenzy of the debut and the useless Mercyful Fate/King Diamond comparisons, they are now pretty great (I find) but people still cling on to the original black or white idea: Genius or Hacks, "they are not metal", "best thing that happened to metal". Can we please judge them on their own merits without all the genre baggage? Apparently not. 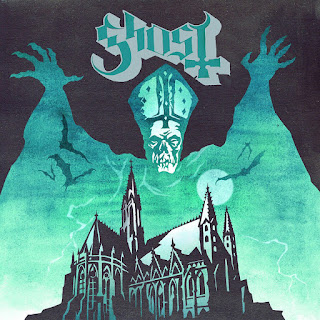 I was negatively impressed with all the hype that followed Ghost's debut. Particularly it was the "these are the true heirs to Mercyful Fate, the band that continues their dark path but also the future of metal". Best thing that happened in metal for ages! (my Vektor shirt says fuck off!) I had no problems if you liked Ghost, just don't fucking tell me they were similar to Mercyful Fate. They had half a chorus (Ritual / Return of the Vampire) and one riff/groove (Elizabeth / Gypsy, my god, the comparison kills Elizabeth for me) that had any real resemblance to Mercyful Fate's music (well, Ritual's riff is also Symphony of Destruction). Not coincidentally, those are the two songs I like from the debut. But that's pretty much it.

Musically, it was way more 70s not-so-heavy rock, maybe Blue Oyster Cult with a pop finish but definitely very little to do with Mercyful Fate. Mercyful Fate was bleeding heavy metal from the get go. If more than 30 years later their offspring sounds so much softer and poppier then what the fuck was the whole international press talking about? That's what REALLY, REALLY bothered me. The comparison to King Diamond. So, all it really takes folks is some face paint, some satanism and an incenser, there you go, King Diamond. Right? Well, fuck no! Not right! (incidentally, a few years later, I saw that the King himself pretty much agrees with me). In short, my point was more about Mercyful Fate and King Diamond and the press rather than Ghost themselves. To be fair, the constant promotion and praising rubbed off me the wrong way ("free with the magazine, a paper Ghost Pope hat", really?)

Then I saw them live, along with Hell and Candlemass. And they were even poppier than I thought. A friend who today claims they are super-brilliant was amazed at their poppiness and called them "softer than *some greek pop artist*." They were actually quite entertaining, esp. the intro to the gig with Masked Ball (unfortunately, the peak of the show but it was cool) and I mean musically entertaining too, for a pop/rock band, although I thought that Papa's voice was really too soft and flat. More to the point, Hell was a pure metal band that truly captured the spirit of theatrical metal in a way a lot of bands that tried before utterly failed miserably, owing a lot to David Bower, their charismatic singer. Yet almost everyone who raved about Ghost's MF heritage failed to acknowledge Hell and they were playing just a few minutes before Ghost. They had the show (shakespearean performances and all), the songs, the metal, the voice - but they lacked Anselmo and Hetfield wearing their shirts. Score for the promotion team!

So, that was my beef really: the blatant display of ignorance regarding Mercyful Fate/King Diamond's music and drawing direct comparisons between that and Ghost. I wrote in an article then something like: Either people have no idea what Mercyful Fate and King Diamond's music is (my main thesis to be honest - and as a KD worshipper I have a problem with that) or they just like the 70s more than they know. Either way, don't tell me this "heavy" (stretching the term) "vintage" thing is the future of metal. 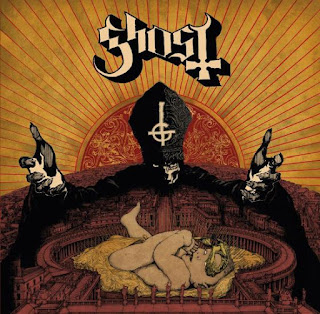 Then they released the second one, Infestissumam, which really saw Ghost taking their rather simplistic thing to a higher level. Their pop streak became way more prominent, music-wise and production wise and now the guitars actually worked nicely with the songs, songs that could work well in a club for example. I also found the songwriting waaaaaay more interesting (Year Zero in particular I thought was the best thing they had done up to that point). The ABBA thing made sense and suited their Rosemary's Baby vibe fine. Also, most people stopped calling them the future of metal music, which helped a lot - it would have been rather moronic to continue with that line of promoting. See, Ghost were obviously aiming for a much, much larger pie than the metal world and they never really hid the fact. They had to start from the metal world, since that's where *they* came from and was the only audience they had some kind of connection, including the business connection (Lee Dorian for one who was not happy to see them leave his company...).

Now, they were free to pursue their vision and personally, I had absolutely no problems with that and said so as well. To my dismay, the problem was now the other way around. People denouncing Ghost for being a gimmick band that has no place in metal. Sure, they were promoted to the point of disgust but as always, if there is no real substance and value behind the entertainment, all the promotion in the world will do SHIT for you, you are bound to disappear after the ads, the trend and the hype go away. That's a universal law. Ghost, on the other hand, were obviously gaining ground and still do with every release. Think about that a bit my dear fellow metalhead.
They sure took the theatrical side of things and the Papa story to a new level, as they were supposed to. Read some of their interviews, you will see they were not trying to fool anyone and you can tell the vision was there already. 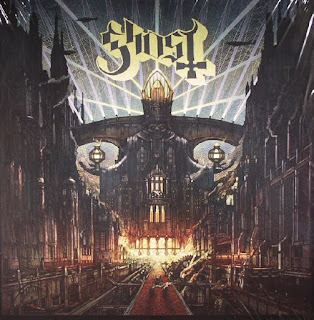 Then came Meliora. I know this is the album that tipped the scales in their favour for a lot of people and rightfully so. This was even better than Infestissumam. The production values were gold. The songwriting now covered a lot of ground, incorporating cinematic elements (proggy?), pop as always, 70s and metal elements. In fact the metal elements on this one sounded more metal than ever before, thanks to the production. Listen to the great Mummy Dust for example. Even Papa has started to sound more interesting instead of that weak flat thing he did (...another comparison to Mercyful Fate...NOT!). Still sounds like a sweetheart though! (Lost in Vegas <3). And having seen the vinyl version, I have to give it to them, they offered the complete package.

But here's the krux of the matter. At this point, Ghost have a definite character, their stage shows are becoming all the more elaborate and theatrical, their music grander and more ambitious, while still remaining catchy. And people STILL fight among themselves debating whether the band is metal or not or if the people who have this debate are retarded or not. The argument is not about the music. It's about protecting our identity and persona as music (metal or anti-metal) listeners. Out of all the arguments out there you will very rarely find actual, pure musical discussions. On one hand you have all the focus on their gimmicks or how their audience are slaves to marketing and on the other hand you have their fans writing off everyone who doesn't like Ghost as a neanderthal. To be honest, the second group has more points on their side. I was one of the first to object to all the "future of metal" bullshit spewed by their promo team and the fever that seemed to plague the entire metal press but fucking give it a rest already. Judge them on their own merits, not based on their genre. Not the finest representation of the metal community, which is quite divided I observe regarding Ghost. I should note however that a lot of the Ghost fans can really get on your nerves quick, as if liking Ghost somehow scores you IQ points. It's the same deal as Tool fans, prog fans, jazz fans or metal elitists. As usual, it all boils down to how you communicate with others. Are you a smug asshole? For or Against Ghost, you are still an asshole dude.

I can of course accept the people who say "their music does shit for me", it's not like their music is the epitome of inspiration and I think they never made an entire album filled to the brim with awesomeness, although I would argue that this Tobias dude has developed quite the knack for writing hooks, which is really not an easy talent to come by. You don't like them, that's absolutely fine and don't let any hipster tell you otherwise. On the other hand, if you don't like them doesn't mean they aren't fucking talented and unique because they really, really are. 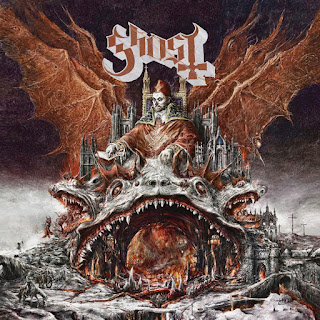 I decided to put this train of thought in words because we are in the promotion period of their upcoming album Prequelle, with two new songs being officially released (Rats, found it great - and Dance Macabre, which I found too poppy and indifferent for my tastes) and history repeats itself: "best thing ever!", "worst shit ever", "geniuses", "hacks", "most unique band of the past years", "a gimmick circus for the masses" and so on and so forth. I've lost count of the discussions spawned which have an uncanny resemblace to the dicussions of two, three, six years ago. Fucking hell. The only thing that seems to have changed is the smugness level on both sides of the argument.

The truth they say is always around the middle. Well, as someone who is not really a Ghost fan (I like 'em) I say the truth this time is closer to those who claim that Ghost is great. They are catchy and fun, I don't think they are music's gift to mankind like some of my friends do but saying they are hacks is really coming off as a true metal crusade against the false. And this is coming from someone who takes metal way too seriously and wrote the article about "fuck off with Ghost as the future of metal". Ghost is not the problem people. Really.

Of course, I have no illusions that this post will make a difference to the chaos that will continue before, during and after Prequelle but hopefully, a lot of people I've had frustrating talks with can see where I am coming from. I am fed up with the whole discussion. I like Ghost, I like some of their songs a lot at least and I can really appreciate their dedication to their vision (I feel I am stretching the use of plural here though, it's really just Tobias/Papa/Cardinal at this point, is it not?).

A good rock band with a great show. That's wonderful. SPARE ME ALL THE REST. PLEASE.