Best of 2016: The normal, thoughtful, insightful and informative blog post is not coming any time soon. Sorry about that!

Don't have the time to make the final selection. I know that Vektor's Terminal Redux is the album of the year. OK? There you go! Best metal of 2016, now you know! 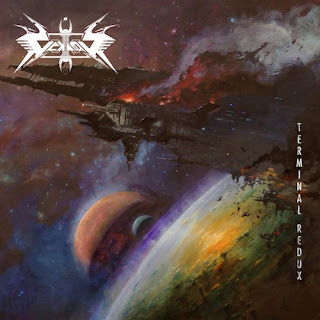 I know the 80s veterans did GOOD, really good in fact and this includes the 3 releases from the Big 4 (winner among them: Anthrax, oh yes sir), Death Angel (best work since Act III and among their best overall), Suicidal Tendencies (GREAT, Lombardo rules - but I liked 13 even more) and you probably know my opinion on Metallica and Megadeth (best work in years by both of them).

I know I liked some newcomers (Ripper from Chile and Armory got the most spins so far) and I know there is a ton of good shit I haven't explored in depth. And I know I am not in any position to draw up a list that satisfies my OCD and sense of duty (lol) and nobody is on my case with deadlines (aahhhhhhh, feels so gooooood!), so no list at this point I'm afraid dear reader.

However, for the benefit of those few people who asked me kindly to give them a list, as a thank you for the compliment of trusting my tastes, I will give you something, until I have made up my mind or decide to organise the Dungeon Metal Awards of 2016 (in a Kodak theater near you) to put all other metal award shows to shame (and how difficult would that be, right?).

This most scientific of lists is my 2016.txt in notepad, where I try to keep track of what the hell is going on. Marked with a * are the albums that would have probably made the list if I had any reason whatsoever to make one on time. I have an opinion on the albums on that list but I am just not in that place, where I have the urge to put it into words. Words will be added in due course (sometime before the new decade arrives)

Labelled "TO CHECK" are albums that I have sampled (a song, a video, a careless listening session of the album, something...) and I liked what I heard and want to listen to in full but haven't come round to do it. Albums I have no solid opinion on. But worth exploring.

Why post such a sloppy list? Apart from the people asking, it's because I think it's a good starting point for anyone wishing to explore some good metal or heavy music (or not so heavy...) from 2016 and thus perhaps someone might discover something that went under his radar.

Tip for the computerally challenged: Highlight the album you're interested in, right-click and google it. There, listen to the youtube. Easy.