Outer Isolation was the album of the month on the December/2011 issue of Metal Hammer Greece. I wrote the review. This is a very clumsy translation. 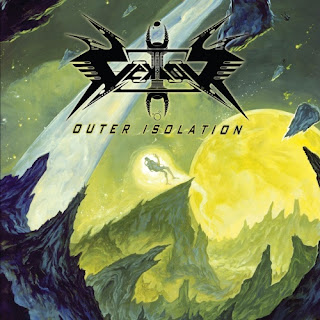 With a (slight) dose of hyperbole, the "New Wave of Thrash Metal" scene, disappointingly often, sounds as if someone has placed inside a blender many different, tasty dishes (Metallica, Kreator, Exodus etc), blended them to the point of mush and emptied the result on a plate with a Repka cover and a Nuclear Assault logo. It can be very tasty, no argument there but how many times can you take the same thing? Let me put it in a different way. Masturbation is highly amusing but if you want to have children, you need someone else who is not you. Because thrash has stagnated and I don’t know for how much longer we’re gonna have albums like The Gathering, M-16, Tempo of the Damned or Ironbound to save the genre. We (as in we, the thrash fans) need new blood to take things forward and out of their boundaries, just like it happened back in the day. And no, The Haunted and Lamb of God or The Blackening (Machine head), no matter how great, are just not the same thing.

All that weirdness of an intro because I'd like to make some bold statements now. The first is that Vektor is the best thrash metal band right now out of all the new ones, meaning all bands formed from 2000 onwards. On a personal basis, I mean out of all those who were formed after the 80s. Which is not as bold as it sounds, it rather says more about the state of thrash metal the past 20 years. The second statement is that Black Future and Outer Isolation are respectively the best thrash metal albums from a band that did not record in the 80s.

We’re talking about infernal thrash metal that dips its toes into the technical death metal of the 90s pioneers, the black metal of later-era Emperor, progressive music regardless of age, which manages to sound incredibly coherent and hyper-intense at the same time. It’s not always the catchiest mix and apart from some dynamites, their songs (on Black Future included) need friction, repeated listens. Some songs (again from both albums), no matter how enjoyable – and they are, do not commit to memory without intensive listening sessions and that is the small issue that deprives them of the 0.5 for the perfect ten, which it has already gained in my fan’s mind, just like its predecessor.

The other small issue is the vocals. You are either gonna love the voice of mastermind / composer / singer / guitarist David DiSanto (right away or with a little getting used to it) or you’re going to say “leave it”. It’s a mixture of Chuck Schuldiner of the Sound of Perseverance era, with a rabid Schmier-of-old elations, Insahn grating, that belongs to the frontman of a black thrash band in a filthy club on Mos Eisley, Tatooine. I loved it from the very first moment but it’s definitely the deal breaker here.

If none of the above phased you, dive in. Cosmic Cortex, in ten minutes (of the catchy variety) had me noting “album of the year?” But when Echoless Chamber kicked in, along with the subsequent repeats in numbers I hadn’t reached in years, I simply erased the question mark. I dub it the “hit song” of the album, half mid-tempo, nightmarishly delicious with its robotic sinister groove, it breaks out at the two minute mark in the best speed/thrash metal I’ve heard in a long time. And in the middle of all that mayhem they throw in a pure melodic prog metal section as well (always full on frenzy of course).

Expect to hear a band amazingly tight, where every member is a highly-skilled player. Compositions that are bold, fresh and perfected, whether they are the proper versions of their demo songs (for the fans: oh, they are, Fast Paced Society has blackened a bit but it rips and Tetrastructural Minds has achieved godly status), or new material that is burning hot. You will also find grand moments in the self-titled song, which combines speed metal with black metal of the most epic intentions.

Finally, two words about the production. Excellent. Modern, highly serving, crystal-clear, powerful and most importantly, original and anti-plastic. The more deathly awesome the album is, the more the sound resonates with life. Vektor has already taken a prominent place in the scene, two consecutive awesome albums have always been excellent credentials in thrash (think about it). Looking at the appetite and determination that DiSanto and the rest of the guys exert however, I think we haven’t even started yet.

Check also: Aspid - Extravasation (1992) - Russian tech-thrash, very obscure, very much worth it and a crucial element to the Vektor sound.

Read the interview with David DiSanto